What prospects for the new Prime Minister?

“The new PM doesn’t have 100 days. They have a few days – or weeks – at most. The decisions they take will determine whether they succeed or fail.” No10 senior adviser

When the new Prime Minister walks into No10 next week, they face a daunting series of economic and political challenges. Soaring energy prices. An unpredictable war in Ukraine. A health service struggling to clear the COVID backlog with pressures likely to rise during the winter. Rising inflation and zero growth. Finding the best way to navigate post-Brexit trading relationships. Delivering the levelling up agenda promised at the last election. Even tackling a single one of these would be a challenge in itself. But taken together, it is an almost insurmountable task.

We are also on the countdown to the next General Election that must be held by the end of 2024The Labour Opposition has moved significantly ahead in the polls and is looking like a credible force once again. Importantly, they lead the Conservatives on managing the economy for the first time in a decade. That will have to change for the Conservatives to have any chance of retaining their majority at the next election

The divisive leadership election has seen the two candidates, and in particular their surrogates and supporters, take every opportunity to take pot shots at each other. That will leave its own legacy. While most voters will not have taken much notice of the candidates’ disagreements or policy announcements, it is clear from the polling that the lack of Governmental action over the summer months, especially to address the energy crisis, has eroded support for the Conservatives. There will also be many unhappy Conservative MPs on the backbenches – plus undoubtedly some Ministers – who the new PM cannot count on for their enthusiastic support. That will inevitably make managing a busy legislative programme far more difficult. Added to that are the heightened expectations that the pledges made during the leadership election must be delivered, and speedily.

So much for the unenviable backdrop to the arrival of the new Prime Minister. It might appear a bleak prospect. But the difference between Opposition and Government is that a new PM is empowered to act. They will need to do so quickly if they are to begin to rebuild faith. There will be no honeymoon period this time. That first impression, from the announcement of the result to the first major policy decision will have a lasting impact, for good or ill.

There will be much media attention paid to the appointment of Ministers and advisers but that will matter little to the wider electorate. Likewise, the first moments when they see the new PM – think Margaret Thatcher quoting St Francis of Assisi or Tony Blair walking up Downing Street – will attract endless column inches. But while those first words will set a tone for the new Government, it will be how No10 tackles the most urgent and important issues that will actually make a lasting difference.

At the top of the in-tray will be the package of measures to help households and businesses to cope with the unprecedented rise in energy costs. Think tanks, pressure groups and a host of backbenchers have already touted different ideas from across-the-board cuts in VAT to energy price caps. None of the ideas proposed to date are capable of addressing the effect of the current – and future – energy price rises completely. So whatever the Government does will end up disappointing some. But it is clear that a bold and significant initiative is required, something akin to the furlough scheme introduced at the start of COVID. Whatever the Government announces will inevitably be attacked by opposition parties. But what will matter is whether what is proposed is seen as a genuine and serious attempt to mitigate the impact of rising energy costs in a significant way by the voters. If the Government fluffs its opening lines, there is little chance that it will be given a second chance.

There will be a number of key set pieces that will demonstrate the direction of the new Prime Minister – particularly the Budget to deliver the tax and fiscal pledges that have been at the centre of the leadership debate. What the Government does to introduce new legislation or amend legislation like the Online Safety Bill or the Financial Services and Markets Bill will also be a clear indicator of how much the campaign promises will translate into Government action. All of these are – of course – also opportunities to deliver positive solutions or changes that will face competition from the emergence of day-to-day issues that can drag down any Government.

In the coming months, on top of the energy crisis, the pressures facing the NHS over the summer do not augur well for the increased patient numbers likely over the autumn and winter months. What COVID has revealed is how poor Governments are at tackling successfully many different problems simultaneously. In the coming months, achieving what has proven impossible for Boris Johnson’s Government will determine whether the new Prime Minister’s term of office can extend beyond 2024. 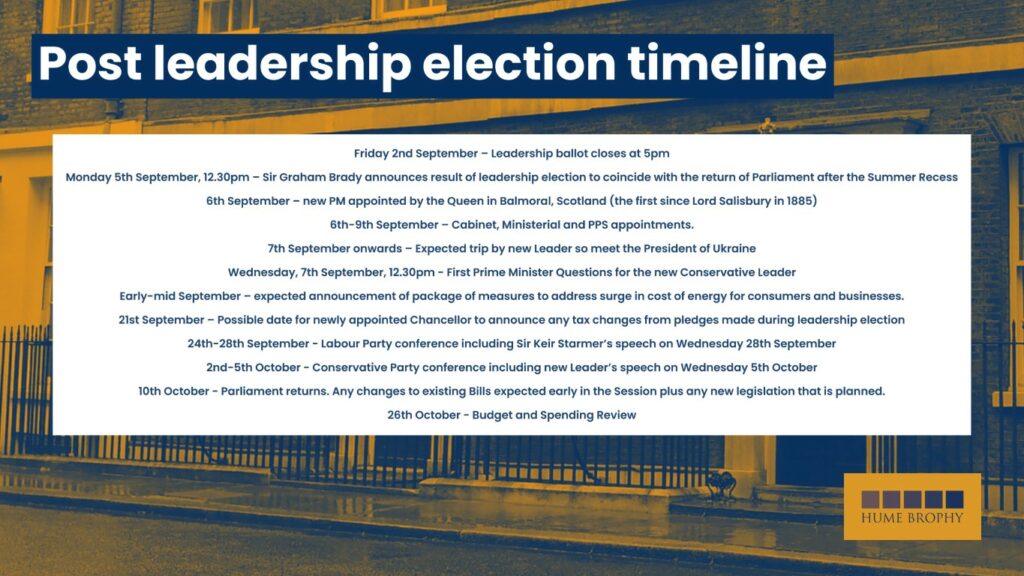 I am currently serving as Managing Director of Public Affairs. I am responsible for advising a wide range of organisations about how best to tackle reputational, political and regulatory issues. I work with the Technology, Energy, Healthcare and Business Services sectors and possess 30 years of relevant experience.
Find out more