Navigating risk, cutting through complexity: M&A and the value of corporate comms

As the remarkable events of 2020 continue to reshape the corporate landscape, industry consolidation in the investment management space shows no sign of slowing down. Asset management companies have felt the squeeze as competitive pressure, rising regulatory costs and a need to reinvent themselves have sparked a fresh wave of mergers and acquisitions.

From Franklin Templeton and Legg Mason to Tilney and Smith & Williamson – and most recently, Morgan Stanley and Eaton Vance Corp – entities are joining forces to ensure sustainable growth. Pundits point to acquisitions as a survival mechanism for smaller players running at a hundred miles an hour just to stand still, but less has been said about the critical importance of reputation in driving value in the eyes of potential acquirers.

M&A at an all-time high?
At the end of 2019, a PwC report highlighted the extent of M&A activity in recent years, suggesting deal activity in the UK Asset and Wealth Management sector continued at pace in 2018, with overall deal volumes increasing by 27% from 2017. 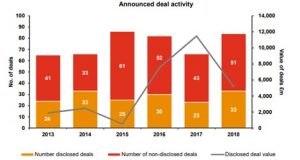 If 2019 saw smaller asset managers on the prowl for M&A deals, 2020 has seen the return of the mega deal – kickstarted by the huge Franklin Templeton-Legg Mason deal, which is worth just under $5bn, and more recently the acquisition of Eaton Vance Corp, by Morgan Stanley worth approximately $7bn.

The role of reputation

Public Relations professionals have long argued that reputation management amounts to far more than racking up brownie points for good behaviour. In fact, it is fundamental to businesses and their bottom line.

In the past 40 years, there has been a dramatic shift in how companies are valued and assessed. Physical and financial assets are the cornerstone, of course. But according to the Reputations Institute, since 2006, a strong reputation yields 2.5 times better stock performance when compared to the overall market. And a 1-point increase in reputation yields a 2.6% increase in market cap.

The 2019 AMO Global Reputation Value Drivers revealed 79% of the companies reviewed saw their stock values shored up by corporate reputations that accounted for $17.2 trillion of market capitalisation. At the other end of the scale however, 21% of companies saw their market cap reduced by a total $436 billion due to the impact of negative reputations.

The data highlights the role reputation can play in a company’s valuation and the need for companies to integrate risk management models that incorporate corporate affairs to develop risk management frameworks before, during and after M&A activity.

Communications can make or break your deal

History tells us that most M&A deals end in failure. An analysis of 2,500 such deals by LEK Consulting shows that more than 60% of them ultimately destroy shareholder value. One possible reason for this is the lack of attention paid to communications post-integration.

A strong communications strategy and plan to promote business continuity must be shared across the value chain to ensure the right messages are being reinforced throughout. Internally, key stakeholders must be kept abreast of the latest updates and have a clear sense of any new ‘vision’.

External communications both before and after the transaction is crucial to the success of the deal. It is paramount that both organisations’ reputations are safeguarded during this often volatile and frenzied transition. Clear, precise, and consistent communication will work to dispel any myths or rumours that might otherwise proliferate in the public domain, while ensuring the organisation’s key stakeholders (employees, vendors, investors, regulators) understand the evolution that is taking place.

For firms going through a merger it can be a volatile period, but there are also opportunities to ensure a business is well-positioned for the next phase of its life.