How fake news is getting to the heart of media truth

There is nothing new about the term “fake news”, the shiny new buzz word for this year. The expression first started floating around last year  when Facebook came under scrutiny for publishing unverified content and “fake” news stories.

It was amplified during the 2016 US Presidential election when questionable news stories started circulating about the two candidates. In the process Fake News became a powerful political tool for each side.

Late last year, the former US president, Barack Obama, mentioned the fake news phenomenon as a threat to democracy.

“Increasingly,” he said, “we become so secure in our bubbles that we start accepting only information, whether it’s true or not, that fits our opinions, instead of basing our opinions on the evidence that is out there.”

However, today is the era of one click social sharing. Stories can spread like wildfire, with the real possibility of lasting damage. The maxim that what goes online stays online is a real truth.

Media consumption has also changed, with research from the Reuters Institute showing that now more than half of Irish consumers get their news through social media sites. The power of online fake news originators  is considerable.

The internet gives everyone the freedom to post whatever they want, whenever they want. Social media has given everyone a speaking platform with a wide reach. It has also brought about a new polarised mentality where everyone feels the necessity to have an opinion on everything.

The New York Times published an article outlining the lifecycle of a fake news story and how one man’s misinformed assumption became a national story. Last November, Eric Tucker, in his own words, a “private citizen who had a tiny Twitter following” posted an inaccurate tweet and accompanying photo of what he believed to be busloads of fake anti Trump protestors on their way to a march.

Within hours the tweet garnered 16,000 retweets, became a thread on Reddit and was shared on a plethora of credible websites. The story proved one important point; sensationalism beats facts when it comes to creating a viral story.

So how can any organisation create cut-through in this world where the lines between fact and fiction are so hazy?

Some brands are taking the approach that if you can’t beat ‘em, join ‘em.  In 2016, Lidl Ireland’s LadyBall campaign was probably the best example on

a national level of how an organisation used the principle of fake news to achieve its communications objectives.

In a highly publicised and controversial campaign, Lidl announced its sponsorship of the Ladies Gaelic Football Association with an integrated campaign across print and social media to promote a fake product targeted only at women.

Similar to Eric Tucker’s tweet about the fake Trump protestors, the story started as a small Twitter account, and within a short space of time it was picked up by international news outlets. The campaign divided communications professionals across the country, some calling into question the ethics of it. 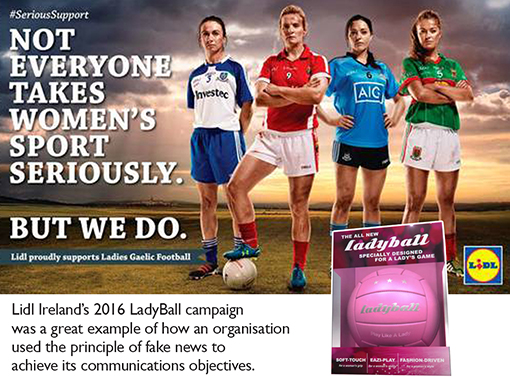 Sceptics might argue that PR is no stranger to fake news. From spin doctors to brainwashers, PR practitioners have always fought against negative stereotypes with an underlying theme of untruthfulness.

However, it is important to draw the distinction between fake news and spin. Unlike corporate spin or political exaggeration, fake news is completely and intentionally made up.

Fake news threatens PR because it undermines the credibility and authenticity of the media. Achieving favourable media coverage has always been an integral KPI. The very principle which underlines PR is the belief that what the media say is the truth. If there exists any doubt in the validity of output, media coverage has little or no value anymore.

There is also the potential reputational damage that could be caused by a fake news story undoing years of corporate reputation building.

The question that remains is, is there any hope? Has the media lost all credibility to the point that PR professionals are wasting their time?

The answer in short is no.  Facebook has taken a firm stance on fighting the fake news epidemic by introducing their Facebook Journalism project which aims to work collaboratively with media outlets to provide verified content to users so they can “equip people with the knowledge they need to be informed readers in the digital age”.

The project involves a number of measures including an updated “trending” feature which now shows stories covered by several publishers rather than just the most-shared content. Similarly, Google has now added a fact checker label to stories have not been verified and has announced they will now restrict ad serving for fake news sites.

From the PR perspective, fake news means media relations are more important now than ever before. Earned media now carries an extremely high value and PR practitioners must work with the media to produce content that is transparent and accurate.

Fake news also reinforces the importance of media monitoring, particularly online and on social media. While media monitoring software is constantly evolving and becoming more advanced, there are occasions when monitoring by the human eye will only capture certain stories or mentions.

Crisis communications and issues management take on another level of importance and should be embedded into the skill set of all PR practitioners from in-house to agency at all levels and sectors.

PR practitioners must have a crisis communications plan in place for all clients, ensuring this contains provisions for social media.

Fake news undoubtedly poses a threat for PR but it is just a feature of the post-truth environment that we find ourselves in in 2017. This environment requires a new framework of thinking and an enhanced skill set to navigate the fake news jungle.