The Alliance Party will be the third largest party and have made the greatest gains, more than doubling their seats. The SDLP has lost considerable support, as has the DUP and the UPP.  This will take the SDLP below the threshold which will entitle them to ministerial seats under the power sharing government model which uses the D’Hondt system to allocate ministerial positions.

Our calculation of the D’Hondt process produces the following Executive, which assumes the Alliance Party will continue to hold the justice portfolio, appointed separately.

SF will have four seats at the Executive table, the DUP three, Alliance two and the UUP one. The breakdown by designation within the Executive will therefore be four nationalist ministers, four unionist ministers and two ‘others’.

The breakdown by designation is:

This is important because critical legislation and elements of the Northern Ireland Protocol must be approved by cross-party consensus (a majority of MLAs in both major communities). There will be a demand to reform this system by the Alliance Party which will be able to argue that ‘others’ are disenfranchised under the existing arrangement.

It is worth noting that the trends in support for parties from each group are not what people might think. The fact is that nationalist and unionist parties have consistently lost support over the past 25 years and the vote for ‘others’ has been slowly increasing. The decline is greater within unionism which has lost approximately 15% of its support but nationalism has also been on a steady if less meaningful decline. 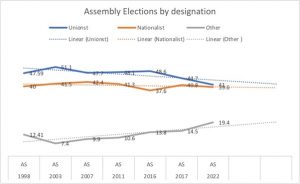 Let’s look at some of the totemic issues which dominate the narrative around Northern Ireland politics and what the results tell us about them:

What do the results imply for a united Ireland? Well, not a lot. Sinn Fein will not be able to argue that there is increased support for nationalism, when in fact it has declined.

What do they mean for the Protocol? Again, not a lot: 60% of people voted for parties that support the Protocol, and 40% did not, so opposition to the Protocol has actually subsided.

That said, because of the power sharing model where First and deputy First Ministers are co-equal, these two issues will remain very present and will impact on the ability to form an Executive and its long-term sustainability.

The Assembly must meet within eight days to elect a speaker and appoint First and deputy First Ministers.  Whilst a speaker may be elected there is no expectation that FM and dFM positions will be filled as the DUP have made changing the NI Protocol a red line for their participation in government.

Enter stage left the UK and Irish governments, as well as the EU. Whilst all will talk tough about not being able to change the Protocol it will be in everyone’s interests to ‘fudge’ the issue, allowing the DUP to claim a meaningful change has been made. This could take months but there will be very considerable popular pressure bearing down on all parties in Northern Ireland to get back to government and address a genuine cost of living crisis in one of the poorest regions on these islands.

The parties will have up to 24 weeks to find a solution, until the UK government must step in and either call a fresh election or further extend the Assembly in a state of limbo. It’s worth noting that this window could be shorter as the Assembly must agree at the end of a six-week period whether to extend the window – up to a maximum of 24 weeks.

In the interregnum the current ministers (from the previous Assembly) will remain in post in a caretaker capacity. The SDLP will need to nominate a new minister for this period as their incumbent lost her seat. Don’t expect anything new from this group as they do not have an agreed budget to spend and are unable to make new policy.

I am Penta’s Managing Partner, Europe and Asia, and also a strategic communications and government relations consultant specialising in Anglo / Irish affairs and UK EU affairs. I have extensive international corporate strategy, crisis communications, international and integrated campaigning experience in the disruptive technology and energy sectors as well sustainability adaptation.
Find out more